Convert spells from AD&D and d20 to BRP

There are loads of AD&D and d20 adventures available, both in print and online. These notes are a few thoughts on how one may go about to convert spells from AD&D and d20 sources to BRP.

There are eight schools of magic, which forms the wheel of magic (see fig. below). A mage usually specializes in one school but is of course able to learn spells from the other schools, but this is not as easy as when learning spells from his own schools. His own school is called the primary school, the schools adjunct to his own on the wheel is called his secondary schools and the schools that are one step away from the secondary schools are called the tertiary schools. The school opposite to his is own is called his diametric school and the schools adjunct to the diametric school are known as the opposed schools. Theres also a ninth form of magic, grey magic. Grey magic is a neutral magic, it is a combined flow of arcane energy, but only the most skilful mages can master grey magic.

The Wheel of Magic: 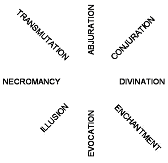 This value is used in many computations, its equal to Spell School Skill Level / 10 rounded down. For example, a mage with Evocation 57 has an index of 5 in Evocation.

Its suggested not to use MP:s but rather a related concept called spell points. Spell points are, as far as the game mechanics goes, increasable by experience. In reality its the increased skill of the mage that makes him more resource effective. An experienced mage uses his mp:s more efficiently than en inexperienced one, a spell that would have drained 15 mp from the less experienced mage only drains 5 mp:s from the more experienced. But its easier (IMO) to simulate this increase in efficiency by increasing the amount of spell points available based on the level of skill in all magic schools than to use a modification to the spell cost based on skill level.

The best way to solve the problem with Caster Level (CL), which is used in D&D to measure the magnitude of a spell, I think would be to allow the player to manipulate spells up to their Spell School Index but to apply an extra cost in spell points when they do. The basic CL of a spell is equal to the difficulty level (DL) of the spell. For each additional CL above the DL, apply a +5 modifier to the Spell point cost. For example, a Fireball spell is a DL 3 evocation spell. A mage with evocation 57 can therefore expand a fireball spell by up to two CL:s. The spell would then cost (3 x 5) + (2 x 5) = 25 spell points to cast.

In most cases its probably best to alter the spell so that the caster has to choose between amplifying the damage done, the area affected and/or the range of the spell.

Spell range is measured in classes with modifications for Effective caster Level. As suggested above increases in range and/or area should come at a price. Add 5 spell points to the total cost of the spell per every increase in range or area covered.

Most D&D spells does too much damage in BRP terms. This can be mitigated somewhat by applying an extra cost in spell points when the character wants to increase the damage done. A Fireball has a base damage of 1d6, if a player would want to amplify that to 3d6 damage it would cost him 10 spell points.